St. Nicholas Church — Then and Now 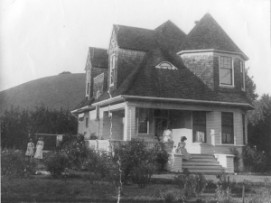 A historic house found a new purpose as a parish hall.

Sitting behind St. Nicholas Orthodox Church, one of two Orthodox parishes in Marin, is a historic San Anselmo house.

The house at 102 Ross Ave. was built around 1896 by Frederick Sproul Taylor, the youngest son of Samuel P. and Sarah Taylor (for whom the park is named), and his wife, Kate R. Eagleson. Other Taylor family members had homes next door and directly across the street — still standing at 101 Ross Ave.

The Frederick Taylor house, shown here circa 1900, projects a spacious and sprawling sense of the shingle style, though it deviates from the classic shingle style in that the exterior walls are clad in narrow clapboard. Many shingle style homes include polygonal towers and dormers of varying shapes, including the low arched eyebrow seen in this house.

Frederick and his brother Edwin Mastick Taylor were salesmen for their father’s paper company. They left in the spring of 1898 for the Klondike gold fields of Alaska. The two men were among the 34 passengers who perished when the schooner Jane Grey sank off Cape Flattery, Washington. Frederick’s widow moved east with their two daughters.

The house was purchased in 1917 by an unrelated Taylor family, that of Henry William Burslem (H.W.B.) Taylor. He was an attorney and became active in civic affairs in San Anselmo. He served on the town’s board of trustees from 1917 to 1920 and as its chairman from 1918 to 1920. They remodeled the house about 1920, and sold the property in 1931.

For many years the property was a boarding house, managed by owner Lotte Lewis. In 1956, the St. Nicholas Church Community of San Rafael purchased the property. Services were held in the house until the 12th century-style church was constructed in front in 1968.

Today, the old 1896 Taylor home, with a fresh coat of paint, serves the vibrant religious community as the church’s parish hall.